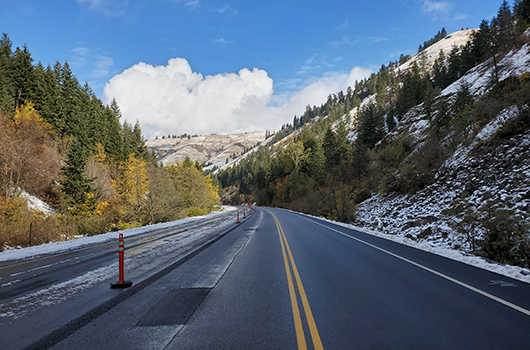 After the next two weeks, drivers will no longer be slowed by construction to build a passing lane on U.S. Highway 95 between Culdesac and Winchester as the project shuts down for winter.

The original schedule included the opening of a new passing lane for southbound drivers in November, but challenges with environmental resources has delayed completion.

A few months into construction the contractor discovered important sensitive resources within the project limits and stopped all work on that portion of the project.

The Idaho Transportation Department works with the Nez Perce Tribe and other entities on certain projects to avoid, minimize or mitigate impacts to these sensitive resources. On some projects with potential cultural resources, the department hires resource monitors to observe construction activities.

Then in late August, while the contractor was building a retaining wall near Lapwai Creek, some steelhead trout were stranded and subsequently died. Steelhead trout in the region are listed as threatened under the Endangered Species Act.

Construction plans were approved by the National Marine Fisheries Service (NMFS), an agency of the National Oceanic and Atmospheric Administration, and the project was approved for some fish being harmed or killed, though to a lesser extent.

“After the incident this year, we partnered with the Tribe and the NMFS to revise the plan for the remainder of construction. We will also discuss the remainder of work so that the fish are better protected when we resume work,” Resident Engineer Curtis Arnzen said.

Arnzen believes collaboration on this project will improve construction practices for future projects as well.

“Given the environmental challenges of the project, we do not know exactly when construction will begin next year, but we hope to start next July, which is a good time of year for in-water work in Lapwai Creek relating to the protection of threatened fish,” Arnzen said.

This project is part of a corridor-wide plan to finish building an 11-mile passing lane in Culdesac Canyon to provide safer opportunities for drivers to pass.