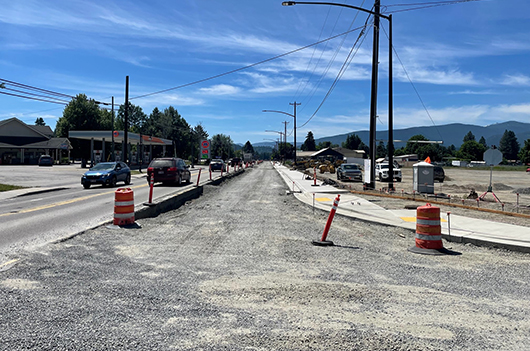 Operations within the ongoing work zone on U.S. Highway 95 in Bonners Ferry will shift shortly after the Fourth of July holiday as crews begin paving the southbound lane.

All work this season will focus on building a three-lane section featuring wider shoulders and sidewalks on both sides between Eisenhower Street and Alderson Lane. Since construction began in April, crews have been able to place base, curb, gutter, and sidewalks for the southbound lane for the expanded highway, begin work on the proposed stormwater pond, and start light installation.

During one week of paving, traffic is expected to continue to have a lane in each direction but will be periodically stopped to allow trucks to enter and exit the work zone.

In mid-August, crews plan to resume daytime work to focus on the northbound lane. This phase of the two-year project is expected to end in October.

The city of Bonners Ferry has elected to landscape sections between the curb and the sidewalks with decorative rock, rather than grass as used in previous phases, due to the unforeseen extremely high maintenance costs. Property owners or individuals interested in “adopting” the section in front of their property and agreeing to maintain the grassy area, if constructed, should contact the city at (208) 267-3105 by the end of July. Sections that have been adopted for maintenance may be landscaped with grass rather than rock if a maintenance agreement can be signed.

Construction from 2018 to 2020 built similar improvements from the Kootenai River Bridge to Alderson Lane. Learn more about this project at itdprojects.org/us95bonnersferry.