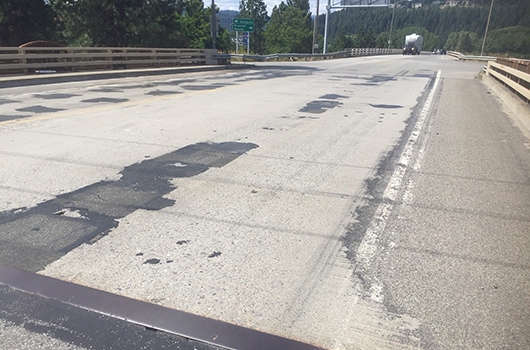 Idaho Transportation Department maintenance workers will repair US-95 near the Lincoln Avenue/Walnut Avenue intersection for the next two weeks.

Work will start Monday, July 29 at the US-95 interchange with Northwest Boulevard. Drivers leaving the downtown area on Northwest Boulevard will not be able to take the northbound ramp to US-95 for approximately two days as it is repaved. The ramp will open at night, but during the day drivers will be directed to use Lacrosse Avenue as a detour to the highway.

After ramp work is complete, crews will patch the bridge deck. One lane in each direction will be open, but drivers should expect short delays when traffic must be stopped to move equipment on and off the bridge. Drivers will also not be able to turn left from US-95 onto Northwest Boulevard.

Work will progress north to the Lincoln Avenue/Walnut Avenue intersection. Flaggers at the intersection will guide alternating traffic.

Repairs will address the deteriorating pavement in advance of the planned intersection redesign, which has been delayed to 2026 as part of an update to ITD’s seven-year program.

The program is out for public comment until Aug. 2.