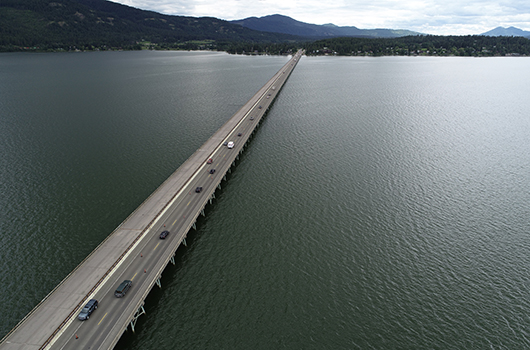 Repairs to the Long Bridge on US-95 over Lake Pend Oreille are now underway to help keep both structures in service for a total of 100 years.

The vehicular bridge was built in 1981, and the pedestrian bridge was constructed in 1956. Both structures need to have their joints—the parts of the bridges that allow them to expand and contract with the weather—replaced. Lighting under the navigation spans will also be upgraded.

Most of the work will take place underneath traffic as crews will be wrapping the piling that supports the vehicular bridge with a protective coating. Workers will use barges and start at the southern end of the bridge, with boat traffic restricted from entering the work zones in the water.

Starting in June, walkers and bicyclists will have less space during weekdays as crews replace the joints and repair portions of the deck. No work is planned to impact the pedestrian bridge at night or on weekends. This part of the project could take up to 12 weeks to complete.

Drivers aren’t expected to experience any major impacts until late July when crews will close one lane at night to replace the joints and apply a protective coating to the guardrail. These efforts are scheduled to take one month to complete.

No work is allowed on either structure during weekends or city events.

Deck repairs are not included in the work programmed for the vehicular bridge, but plans to address damage caused by waves to the retaining wall for the path were added to the project earlier this year. At this time that segment of the project has not been scheduled.

McMillen Jacobs Associates is the primary contractor on this $9.7 million project. They estimate that all work will be finished this fall. Learn more about the project at itdprojects.org/us95longbridge.