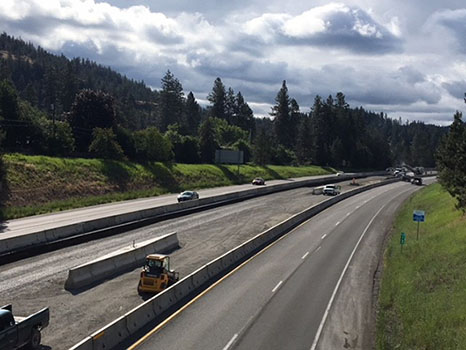 Photo of construction in CDA from earlier this year.

It is the question on drivers’ minds as they continue to navigate through orange barrels and divided lanes on I-90 in CDA: when will there be more than two lanes?

The short answer: not in the immediate future, primarily due to a lack of funds.

Currently, work is progressing to reconstruct and lower the interstate through town, with preparations also underway near the Huetter Port of Entry to accommodate traffic flow and bridge maintenance next spring.

Despite appearances, neither of these projects includes the addition of a third lane.

The need is there, but the funding is not.

The latest study estimates that the expansion of I-90 to a divided, six-lane roadway from state line to 15th Street in CDA could require approximately $120 million. That estimate does not include the expansion of bridges—of which there are six—easily elevating the cost another $120 million.

Even though federal funds would spare ITD the majority of bridge replacement costs and all but 7 percent of pavement costs, that is still a significant chunk of the local  ITD district’s budget, which is set at $29 million for next year and designated for pavement work only.

Unfortunately, there is no easy solution: temporary shoulders and crossovers under construction have not been built to withstand prolonged truck traffic, nor have they been approved by the interstate’s owner, the Federal Highway Administration (FHWA), meaning they can’t stay.

Ideally expansion would also be coordinated with our neighbors at the Washington State Department of Transportation (WSDOT) to ensure drivers could expect consistent traffic conditions through the larger corridor. At this time, WSDOT officials plan to increase efficiency on the interstate with ramp meters in downtown Spokane, and eventually lane and speed control all the way to the border, since there are not adequate resources or priority within existing funding to expand the route.

As the area grows, traffic demands on the entire state highway system will increase, forcing projects to compete with each other for funding. Projects currently programmed for the next seven years include the expansion of Idaho Highway 41 between Post Falls and Rathdrum, Idaho Highway 53 between state line and Rathdrum and portions of US-95 between CDA and Sandpoint.

That doesn’t mean I-90 will stay the same for the next seven years. The department does have projects in the program to maintain overpasses, to reduce rutting and to preserve existing pavement. Larger projects scheduled include the redesign of the I-90/ID-41 interchange, and depending on the success of a submitted grant application, the relocation of the Huetter Port of Entry to the west.

In the meantime, ITD will make adjustments to the corridor where possible and continue to collect the data necessary for eventual expansion, with the next study anticipated to be completed in the coming year.