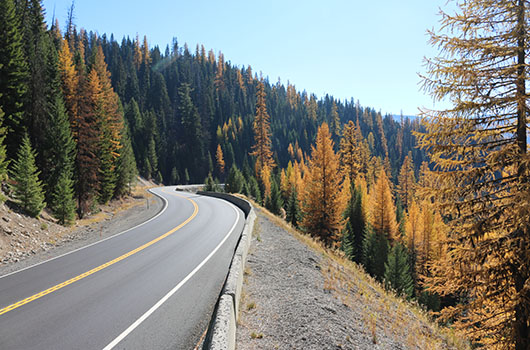 As early as February, ITD engineers were reaching out to the public to discuss a major undertaking for US-12 this season: two bridge replacements and 50 miles of paving.

That’s no small amount of work for the highway that follows the Lochsa River through abundant U.S. Forest Service lands and provides access to popular fishing spots and hot springs; it also gives the trucking community a scenic shortcut into Montana as it winds its way up to Lolo Pass.

Used by locals and tourists alike, this two-lane highway would see significant work and miles of orange barrels for the first time since 2000. ITD cautioned all drivers that working on so much in the remote location could lead to delays upwards of two hours.

“There are not many places to pass in the corridor, and with all of the summer traffic it normally sees, we definitely wanted to overstate delays rather than understate them,” project manager Janet Zarate said. “Thankfully, we were able to keep delays at 60 minutes or less all summer.”

ITD specifications limit delays through projects to 30 minutes, but the contractors working in the corridor phased the work to improve their efficiency and further minimize delays. Hotspots installed specifically for the projects provided connectivity that enabled project staff to promptly address any issues with delays.

Creative thinking also led to a partnership with Three Rivers Rafting out of Lowell, which ITD hired to shuttle bicyclists through the work zones.

“This partnership makes sense because at that time of year, the river doesn’t run as high, and there are fewer rafters,” resident engineer Joe Schacher said. “During their season, these companies routinely shuttle their customers up and down the river, and we didn’t see a reason for that to end this year. They have the right equipment, and we could give them an opportunity to economically benefit from construction.”

According to the rafting company, the shuttle operated for nine weeks and hauled 263 bicyclists who were visiting from all over the country and the world.

The service did not go unnoticed by the Adventure Cycling Association, which organizes some of those trips and was contacted personally by ITD engineers prior to construction.

In a letter to ITD, the association commended their efforts, which they said may be a model for construction managers in other states to follow to accommodate their groups.

As ITD engineers found ways to ease the impact of construction, they were also able to work with operations to advance more projects, including a preservation project between the two paving jobs.

In total, more than $17 million was spent to replace two bridges and resurface roughly 55 miles of US-12.

“We appreciate the patience of drivers who encountered us on the roads all summer,” Zarate said. “Now we look forward to years of driving on an improved highway.”