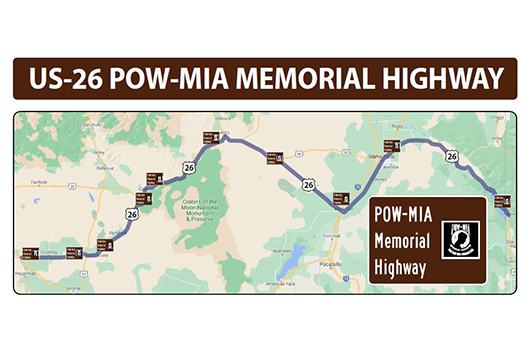 Idaho legislators, representatives from the National League of POW-MIA Families, community members and the Idaho Transportation Department will officially celebrate the naming of US-26 in Idaho as the “POW-MIA Memorial Highway” at 2 p.m. Wednesday, October 6, 2021, at the Carey City Park – Boyd Stocking Pavilion.

During the 2021 Idaho legislative session, HB132aa sponsored by Representative Scott Syme and Senator Patti Anne Lodge, formally designated and named US-26 in Idaho, the POW-MIA Memorial Highway. The bill unanimously passed both chambers, respectively, and was signed by Governor Little in April.

Idaho is home to eight soldiers designated as MIA and the City of Carey happens to be home to one of those individuals. Jon Michael Sparks was a helicopter pilot for the US Army and was lost in Long Binh Province, Laos, on March 19, 1971.

US-26 in Idaho runs from the Oregon border to the Wyoming border. The highway naming is part of a nationwide effort to designate US-26 as the POW-MIA Memorial Highway from coast to coast, with several other states participating over the years as well.

There are 10 locations across US-26 in southern Idaho where new POW-MIA Memorial Highway signs will be installed.