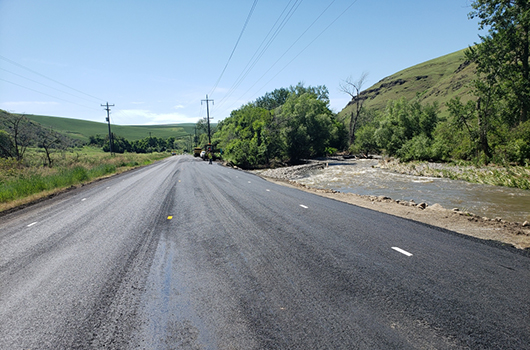 Both lanes of U.S. Highway 95 south of Lapwai at milepost 296 are now open following repairs to damage caused by flooding earlier this week.

Floodwaters from Lapwai Creek first began eroding the northbound lane on Monday morning, and the Idaho Transportation Department reduced traffic to one lane. Repairs began later that day, with crews bringing in rock to replace what was lost and prevent further damage.

“We are happy to return US-95 to normal condition,” Operations Engineer Jared Hopkins said.

Traffic impacts and highway conditions are available 24/7 on 511.idaho.gov.

One lane of U.S. Highway 95 remains closed south of Lapwai at milepost 296 due to flood damage.

“With floodwaters receding and drier days in the forecast, we feel we are past the emergency,” Operations Engineer Jared Hopkins said. “Yesterday, we rushed to get an excavator on scene to start placing large boulders against the bank to save what remained of the northbound lane of US-95. In one spot, it had washed away to the center.”

Watch a video of the flooded creek.

Watch a video of traffic moving around the damaged section.

Crews aim to finish placing rock and reopen both lanes of the highway by the end of the week.

“We are working hard to have two lanes open with an asphalt surface as soon as we can,” Hopkins said. “Then we’ll start focusing on more permanent repairs later this summer.”

Water over the roadway has also been reported on State Highway 6 between Potlatch and Deary. Before traveling drivers should check conditions on their routes at 511.idaho.gov.

Flooding closes one lane of US-95 south of Lapwai, more rain in the forecast

Earlier this morning, the Idaho Transportation Department closed one lane of U.S. Highway 95 four miles south of Lapwai at milepost 296 due to flooding.

“Flooding of Lapwai Creek has washed away the shoulder next to the northbound lane and may be undermining the highway,” Operations Engineer Jared Hopkins said. “Closing that portion of the roadway is necessary to ensure safety.”

“Until the rain stops and the creek drops, there’s nothing we can do except monitor the flooding and close the highway if necessary,” Hopkins said. “We want to put drivers on notice that we may need to shut it down.”

Before traveling drivers should check conditions on this highway and others at 511.idaho.gov.