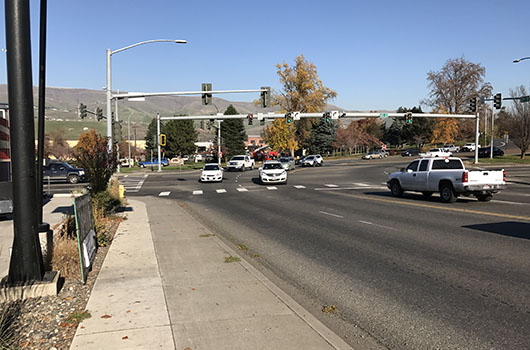 The Idaho Transportation Department invites the public to attend an open house on Feb. 28 about upcoming improvements to the US-12 and 21st Street intersection.

The open house will be held from 4 to 7 p.m. at the Red Lion Hotel in Lewiston (621 21st St.). Attendees will have an opportunity to view construction phasing and detours for work that is scheduled to begin in March and last through October.

Construction will improve safety and traffic flow at the busiest intersection in Central Idaho by creating a more standard intersection. View the full list of changes.

The intersection will remain closed for the season, with the following detours in place:

Through traffic on US-12 will not be detoured but will be reduced to one lane in each direction. A temporary signal will be installed at East Main Street and the highway to allow drivers to directly travel east on US-12 or Main Street.

Crews will typically be on site throughout the week during the day, but work is allowed on weekends. Visitors to Locomotive Park can expect short closures during the first phase of construction as city stormwater improvements are installed.