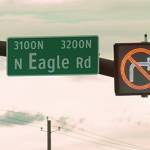 There’s a new feature on two signals along Eagle Road in Boise that’s sure to grab your attention: LED signs that light up to display a “no right turn” message.

Two signs have been placed on the intersection of Ustick and Eagle. It can be seen by the cars traveling the east-west Ustick corridor. The signs light up when cars on Eagle have a green left arrow light. The purpose is to prevent collisions between traffic making legal U-turns on Eagle and cars turning right off of Ustick.

While no crashes have been reported in this area, a number of near misses have been observed.

“This should eliminate those,” said ITD traffic engineer Erika Bowen. “We’re looking at doing a pilot for it. If this is successful, ITD plans on installing them up and down the Eagle Rd. corridor.”

Currently, many intersections on the corridor feature a sign advising those turning right to “Yield to U-Turns.” The new signs actively turn on and off only when necessary. The hope is the change will grab a driver’s attention and induce safer behavior.

The pilot program is a partnership between ITD and the Ada County Highway District. 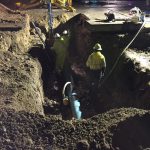 The Idaho Transportation Department plans to completely open a section of Eagle Road (Idaho Highway 55) near the Village at Meridian in time for Thursday’s morning commute.

Final paving and striping is expected to wrap up around 10:00 p.m. tonight. When the work is done, the road will immediately open to traffic.

ITD was able to open limited access on the affected area Tuesday night into Wednesday to alleviate congestion during the a.m. commute. The section was closed again at 9 a.m. Wednesday to make final repairs during the day.

This section of Eagle Road sees 49,000 trips on average. Combined with the nearby traffic on Fairview Ave., this intersection is the busiest in Idaho with an average 76,000 daily trips.

They are currently laying pavement to patch nearly 70 feet of road length on five lanes and two approaches into nearby businesses.

Work is expected to be completed tonight, in time for the road to open for Thursday morning’s commute.

The asphalt is spread in several layers to promote uniform curing. When paving is done, the patch will have lines painted on it. The road will open to the public when the asphalt and paint has cured and is cool to the touch.

The section of Eagle Road south of Fairview Avenue, closed Monday after a water pipe break, is reopened temporarily until 9 a.m. this morning. The temporary access will be closed this morning at 9 to allow crews to repave the roadway.

The Idaho Transportation Department has reopened the route to limited access. This involved laying gravel down and building ramps on the edges of the pavement that have been removed.

This requires a speed limit reduction to 25 mph. The public is still advised to avoid the area.

Depending on weather and the cure rate of the fresh asphalt, ITD estimates Eagle Road will be fully open by Wednesday evening.

A half-mile section of Eagle Road between Pine and Fairview avenues was closed late Monday night after a broken water main flooded the roadway. The Idaho Transportation Department is working to open limited access on the stretch this evening. This effort involves laying gravel down and building ramps on the edges of the pavement that have been removed.

A limited access will require a speed limit reduction to 25 mph. Should access be opened, the public is still advised to avoid the area. Any access opened Tuesday will be closed by Wednesday morning at 9:00 a.m. to allow crews to repave the roadway. Depending on weather and the cure rate of the fresh asphalt, ITD estimates Eagle Road will be fully open Wednesday evening.

Work today has involved emergency repairs by Meridian Public Works to the water line and excavation by ITD of the road around the flooded area to fix erosion of the road bed.

Eagle Road will remain closed during repairs. Currently, it is estimated the road will re-open Wednesday afternoon. Access to area business remains open. Detours are in place at Fairview Avenue, Pine Avenue, and Franklin Road.

Crews have dug a trench ten feet wide, 40 feet long, and eight feet deep to access the broken pipe. Once the pipe is repaired, ITD crews will repair the road. That includes backfilling the trench, removing broken asphalt around it, and repaving the section.