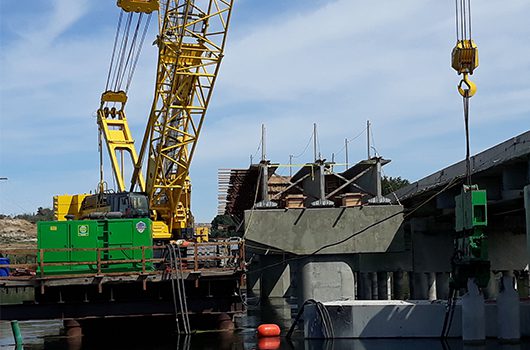 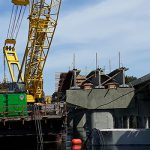 Several intersections on Idaho 55 will be closed beginning Oct. 1. Construction crews are placing concrete gutters along the roadway. Access at each intersection’s will remain closed for 2-3 days (weather permitting) while the concrete hardens.

Flaggers will assist with the gutter operations at the major intersections.

The contractor will be placing the next set of girders tonight, Oct. 1. What to expect: 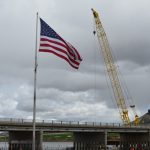 There will be temporary closures on Idaho Highway 55 at the Snake River Bridge in Marsing while girders are placed for the new bridge.

Girders are large horizontal beams that support the surface of the bridge. Each girder weighs 141,000 pounds and is 148 feet long. Current plans call for girders to be placed overnight on Tuesday Sept. 3, Thursday Sept. 5, Friday Sept. 13, and Monday Sept. 16. This is subject to change.

Sunny Slope Rd. southbound will be reduced to one lane between Lowell and True road. The lanes will be restricted from noon to 2:00 am each night to stage the bridge girders. Placement of the girders will generally occur between the hours of 10:00 pm and 2:00 am. Traffic will be stopped for up to thirty minutes while each girder is placed. Each night up to three girders will be placed.

This work is part of a two year-long project to replace the Snake River Bridge in Marsing The project will improve safety and driving conditions on the bridge, which is the primary river crossing for the area. More information can be found at https://itdprojects.org/marsing55improvements/. 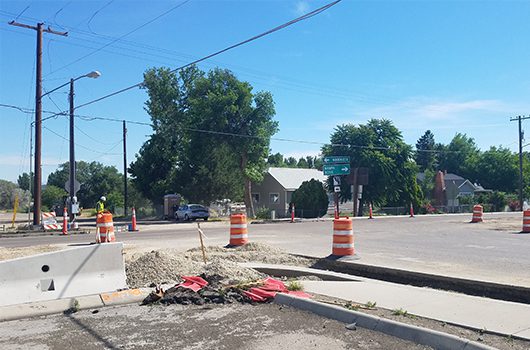 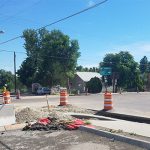 The Idaho Transportation Department is issuing a travel advisory on Idaho Highway 55 near Marsing for July 3, 2019.

Construction to rebuild ID-55 through downtown Marsing and the bridge over the Snake River will impact travel around the City of Marsing’s annual July 3rd Fireworks Extravaganza at Marsing Island Park. Traffic will be reduced to a single lane on the highway north of the bridge and in town. No left-turns will be allowed in town during the event.

The Snake River Bridge is closed to pedestrians and bicyclists. The City of Marsing has arranged for a free shuttle service to and from the event. Please see the event map below for details. 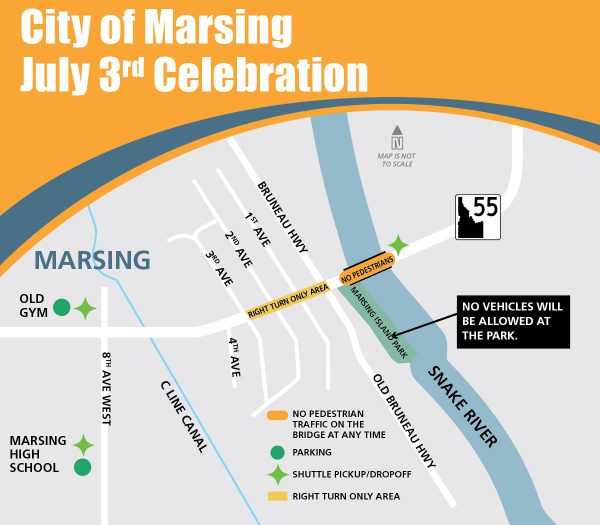 ITD encourages those planning to attend the event consider using U.S. 95 to reach Marsing. Consider carpooling to alleviate congestion as over 5,000 visitors are expected to arrive for the celebration. Plan extra time for the return trip. Please exercise patience and kindness as you leave.

ITD reminds those who will be drinking during the event to make a plan in advance to get home safe. The Department is partnering with law enforcement to increase DUI patrols during the Fourth of July week. 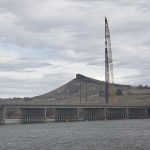 The Snake River Bridge will be reduced to one lane beginning Tuesday, April 9 in preparation for rebuilding the bridge.

What to expect at the Snake River Bridge:

Pedestrians are encouraged to use the south side of ID-55. 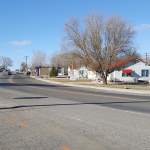 Construction of improvements to Idaho Highway 55 through downtown Marsing has begun. The project will rebuild the Snake River Bridge and repave the highway from the river to the U.S. 95 Junction. When complete, the project will enhance local business opportunities and improve safety and mobility through the area.

Initial work on irrigation lines began Monday, January 14. Major work includes replacing the School Drain pipe and C-Line Canal pipe. Traffic will be reduced to one lane and a temporary signal will direct alternating traffic. Work will be limited to daytime hours, though the lane closure and signal will operate 24/7 for the next 3-4 weeks.

“We are encouraging motorists to plan extra time when driving through the areas during construction,” said David Barrett, ITD Project Manager. “We are improving a major route used to haul agricultural products and move people to and through a beautiful part of Southeast Idaho.”

Work to rebuild the bridge will begin in earnest this spring. During construction, one lane of the bridge will be open to traffic with a 14-foot width restriction. The new bridge is expected to be complete by the summer of 2020.

The contractor for this $20.9 million project is Wadsworth Brothers Construction out of Salt Lake City, Utah.

For more project information and to sign up for updates, visit ITDprojects.org/Marsing55improvements or text Marsing55 to 22828. 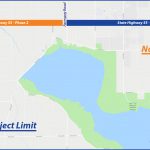 A pavement rehabilitation project between Nampa and Marsing is scheduled to begin July 9 and conclude in late July/early August. Work will seal the pavement and extend the life of the roadway.

The first phase, a six-mile micro-seal from Nampa-Caldwell Boulevard to Farmway Road, will occur in the evening (10 pm – 5 am). Work is expected to conclude the week of July 16.

The second phase, an eight-mile chip-seal from Farmway to the Snake River Bridge at Marsing, will occur during daylight hours. Work is expected to conclude in late July.

During both phases, motorists can expect reduced speeds and up to 15-minute delays as traffic will be periodically reduced to one-lane with a pilot car guiding traffic. Where work is occurring, intersections will be controlled by flaggers with minimal delays. Motorists are encouraged to drive with caution through the work zone.

Schedules are subject to change. The contractor is permitted to work weekends. For up-to-date construction information, visit 511.idaho.gov.