Who Makes the Decisions 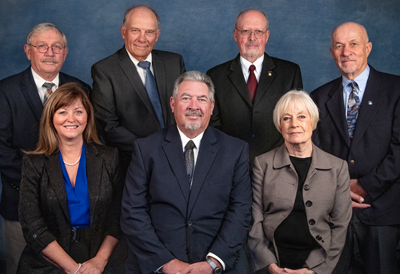 The governor appoints the board members, who are confirmed by the Idaho Senate. Six members represent each of ITD’s administrative districts and the seventh member is selected by the governor to serve as chairman.

Six of the seven board members are appointed to six-year terms beginning February 1. Terms are staggered so that one member’s term expires each year. The seventh member serves at the pleasure of the governor, acts as chair and casts a ballot only in the case of a tie vote. No more than four members may be of the same political party.

Members of the Transportation Board are paid $75 for each day they are involved in board related duties and are reimbursed for necessary expenses.

How to attend a board meeting or contact a board member

The Idaho Transportation Board meetings are open meetings and the public is invited to attend.

One of the board’s critical roles is to select and fund statewide transportation projects. Improving and properly funding Idaho’s infrastructure is a key component of Governor Brad Little’s vision to strengthen and diversify the state’s economy. Without a strong, efficient transportation system, this will not be possible.

The Idaho Transportation Board recognizes the link between the state’s economy and transportation investments. From moving freight and agricultural goods, to meeting the needs of commuters, and improving our transit system for all modes of transportation in our growing state, the board’s goal is to provide a safe, mobility-focused transportation system that moves at the speed of business and drives economic opportunity.

The Idaho Transportation Department staff makes recommendations and the board selects projects based on engineering, safety and economic analyses. The board’s goals are to increase the safety and efficiency of how people travel and goods are transported, generate jobs and business revenue and grow Idaho’s gross domestic product. Although the economy is a vital component of the department’s efforts, safety will not be compromised for economic opportunity.

My personal goal as board chairman is to give good strategic guidance to the department and make sure it provides outstanding customer service as it maintains and improves our roadways, administers motor vehicles services and maintains our remote airstrips. We will do all of this while keeping our mission of “your safety, your mobility and your economic opportunity” as the foundation for decision making.

As we help shape the future of transportation in Idaho, we rely on input from citizens, nearly a dozen transportation advisory boards, state legislators, regulators, other government agencies, and the Governor. Ultimately, the transportation system belongs to the citizens of Idaho and travelers who depend on it to carry them safely across our great state.

Appointment: Serves at the pleasure of the Governor; 7/1/19 –

Disclaimer: The board meeting packets posted on the site are draft working documents. The material in the packets, including the meeting agenda, is subject to change.

Due to COVID-19, currently board meetings will be conducted remotely, via telephone only.

Call-in information will be posted here prior to the meeting date. 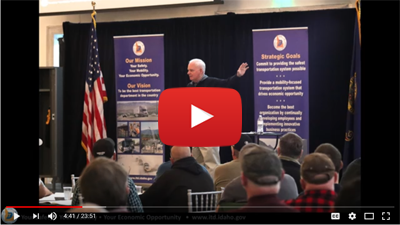 Idaho Transportation Board
Subcommittee on Adjustments to the State Highway System

Members of the Subcommittee are Jim Kempton, who serves as chairman, and Bob Hoff. Jim Thompson serves as the rotating member, participating on the Subcommittee unless a route in a non-Subcommittee member’s district is under consideration to ensure that district is represented by his/her board member. From ITD, the Chief Engineer, a Deputy Attorney General, Transportation Planning Services staff, and the Executive Assistant to the Board and the Local Highway Technical Assistance Council Administrator and a Federal Highway Administration representative provide assistance.

Meeting agendas and minutes can be found at the “Schedules & Agendas” tab and the “Meeting Minutes” tab (above).

For additional information contact the Executive Assistant to the Board, Sue Higgins, at Sue.Higgins@itd.idaho.gov

In 2019, Director Ness became President of the American Road and Transportation Builder’s Association (ARTBA) Transportation Officials Division. ARTBA represents the combined interests of the contracting industry, the consulting community, and the owners of the transportation system. Functioning as a non-partisan federation based in Washington D.C., ARTBA advances public policy designed to increase federal transportation investment and improve the efficiency of the project-delivery process.

In 2018, Director Ness was appointed to the Transportation Research Board’s (TRB) Executive Committee and also serves on their Subcommittee on Planning and Policy Review (SPPR). The TRB is a unit of the National Academy of Sciences, Engineering and Medicine, and serves as an independent adviser to the President of the United States, the Congress, and federal and state agencies on scientific and technical transportation issues of national importance.

Director Ness chaired the AASHTO Special Committee on Transportation Security and Emergency Management (SCOTSEM) until August 2017. Through his leadership of SCOTSEM, he achieved national recognition for applying his organizational model to emergency management and security, which has helped reshape SCOTSEM’s strategic plan.

In 2015, Director Ness was President of WASHTO. In this position, he served as a regional representative to AASHTO’s Executive Committee. In addition, Director Ness sponsored the WASHTO Highway Transport Committee, and was the creator and sponsor of WASHTO’s Emerging Leaders Program.

Under Director Ness’s leadership, the department was recognized in 2016 by the Idaho Technology Council as a finalist for Innovative Company of the Year, and recognized as a finalist for the second time in 2019. Director Ness received the 2016 Navigator Award from the national organization, Route Fifty. The award, in the “Agency and Department Chiefs” category, is based on his citizen-focused approach to government and transformative style. Director Ness was named Trine University’s (formerly Tri-State University) 2014 Alumni of the Year.

ITD began an employee-driven innovation program in 2014. Since that time, the department has implemented more than 1,000 innovations, saved nearly $11 million, created 650 customer-service improvements, and saved 212,000 contractor and employee hours.

In 2013, ITD earned AASHTO’s President’s Award for Administration for its realignment efforts. Director Ness was honored in 2012 as Leader of the Year by the Treasure Valley Chapter of Women’s Transportation Seminar, and since Director Ness joined the department, ITD has received nearly 140 national awards for its programs and projects, including the prestigious Francis B. Francois Award for Innovation.

Director Ness is a nationally recognized authority on organizational realignment and speaks regularly at national conferences for both the public and private sectors about how to structure a more effective and accountable state government. He conducts seminars each year on his “Nine Steps to a Results-Focused Culture” for the National Transportation Leadership Institute’s (NTLI) senior and executive-level management courses.

Director Ness earned a Bachelor of Science degree in Civil Engineering from Tri-State University and a Master’s degree in Public Administration from Western Michigan University. He is a licensed professional engineer in Michigan and Idaho. Before becoming director at ITD, he worked for 30 years at the Michigan Department of Transportation (MDOT), holding a variety of positions in research, operations, aeronautics, construction, and project development. Director Ness ended his career with MDOT as the North Region Administrator/Engineer.

Chief Deputy – Scott Stokes
Scott Stokes, a 25-year Idaho Transportation Department veteran, became chief deputy in 2007 after a long tenure as district engineer in northern Idaho. As chief deputy, Mr. Stokes oversees the divisions of Aeronautics, Motor Vehicles, and Transportation Performance and has primary responsibility for much of the department’s daily operations.

Mr. Stokes is chairman of the Idaho Traffic Safety Council and is intimately involved in all facets of highway safety for the department. He is a leading advocate of the drive to achieve zero deaths on Idaho highways. In support of ITD’s strategic plan, Mr. Stokes also is engaged in the department’s internal and external efforts to promote economic opportunity through transportation and to increase mobility for Idaho travelers. He is a member of ITD’s four-person executive team and reports to the director.

A second-generation ITD employee, Mr. Stokes joined the department in 1992 and served as the state bridge engineer early in his career. He earned bachelor’s and master’s degrees in civil engineering from Brigham Young University and worked for a private engineering firm about eight years before joining ITD.

Chief Operations Officer – Travis McGrath
Travis McGrath started with ITD in late March 2017 as the new Chief Operations Officer after a national search following Jim Carpenter’s retirement. Travis came to ITD after more than 18 years with Golder Associates, a private-sector geotechnical and environmental engineering consulting firm. For the last seven years, he served as Golder’s Pacific Northwest and Alaska Operations Leader. In that role, he was accountable for the performance of a 180-person team across multiple offices.

Travis practiced in structural and geotechnical engineering early in his career, before specializing in transportation project risk assessment and risk management. He led risk assessments for a dozen state transportation agencies, FHWA, and FTA. McGrath brings a strong military background to this position. He served as a Combat Engineer officer on active duty and in the reserves for more than a decade. He led a line platoon during Operations Desert Shield and Desert Storm, and subsequently served as a heavy-equipment platoon leader and company operations officer. He is a strong communicator and consensus builder, with proven decision-making experience and an understanding of the engineering side of operations.

McGrath has a history of setting the vision and holding those around him accountable, with a passion for teamwork and continual improvement. Travis earned a Bachelor of Science in Civil Engineering from Seattle University in 1989, and a Master of Science and Doctor of Philosophy in Civil Engineering from the University of Texas between 1993 and 1998. He is a registered Professional Engineer.

Chief Human Resources Officer – Brenda Williams
Brenda Williams brought an extensive background in human resources to the Idaho Transportation Department in October 2013 when she became the department’s Chief Human Resources Officer (CHRO). Recently, she was the Area Human Resources Manager for Republic Services (formerly Allied Waste Services), in Salt Lake City, where she provided strategic leadership for multiple states. She achieved key business objectives in the areas of development, succession planning, and performance management. Republic is a Fortune 500 company that specializes in environmental services with 31,000 employees in 40 states, including Idaho.

Williams was also the Director of Human Resources for Comcast Corp., (formerly AT&T Broadband), in Salt Lake City, for multiple locations throughout the state. She was instrumental in driving employee engagement through management and employee action teams. Williams was promoted to the position after serving as Director of Staffing and Organizational Development for AT&T Broadband.

Chief Administrative Officer – Charlene McArthur
After a successful career in the private sector, Charlene “Char” McArthur assumed the position of Chief Administrative Officer at the Idaho Transportation Department in October 2013. She previously served as the Global Corporate Controller for the Fluke Corp., a Danaher Operating Company located in Everett, Wash. She was responsible for the company’s financial reporting, internal control, and managing working capital targets of more than 20 subsidiaries throughout the world.

Char attributes her success to developing skilled, dedicated and engaged employees who strategically focus continuous improvement efforts on the organization’s strategic priorities. McArthur, a Boise native, graduated from Boise State University with a BBA in accounting. She has worked in both public accounting and private industry. Char is a licensed CPA.